0
Flash Sale! to get a free eCookbook with our top 25 recipes.
Learn More
Table of contents::

Almond flour pie crust to get the loveliest savory pies!

The almond flour pie crust recipe that I am going to share today has never failed to make its way in my cherished recipe guide when I was preparing the most savory exotic meals! The flaky, smooth and butter-filled texture of almond flour pie crust just fits perfectly with any low carb sweet recipes, and what else all keto lovers would want!

Yes, you can quickly freeze the almond flour pie crust! You can freeze a ball of dough by simply following storage instructions along with raw crust pressed in the pan; the decision is up to your mood!

The specific filling dictates whether it is feasible to freeze the almond flour pie crust or not! You could especially opt for a particular type of filling that supports freezing if that is your prime goal. You can just keep the crust on the counter to defrost it.

This perfect gluten-free almond flour pie crust gets merged with the fantastic pie effortlessly. As many hate the wheat flour, traditional rolled crusts get eluded many times despite being loved by many.

This ultimate gluten-free almond flour pie crust is full of protein dose that is another hearty benefit to make this ultimate pie.

When you are baking traditional wheat flour crusts, greasing the pan isn’t an essential process. But when you are using nut flours in baking, I will say suggest the pan greasing or at least lining a parchment paper on the pan.

The gluten-free almond flour pie crust is utterly delicious right from the moment you take it out from the oven. The freshness of this crust will be maintained for one week if you wrap it tightly and keep refrigerated.

As many have the uncontrollable obsession for gourmet pumpkin, this almond flour pie crust has a soulful taste of pumpkin pie in every bit of it, so it is surely the delightful light for all the lovers! How amazingly pumpkin pie plays up in this recipe is just a beautiful feel to explore. And the sweetest thing to love about it is, it’s a vegan version!

If you are a newbie in cooking pastries and desserts, you might struggle a bit with these tender pie crusts! But don’t worry, the Apple + almond flour pie crust will get into your mind very quickly after you taste its awesomeness! It never fails to delight your family and guest with its crunchy savoury taste!

This pecan enriched almond flour pie crust is one of my most favourite to make savory pies in the happiest moments! It’s a real sizzling gourmet treat that would enchant you with its elegant texture and flavor. The simple variation that plays out uniquely in this recipe is pecan flour, and it works as an excellent substitute for hazelnut flour or coconut flour.

You can create the numerous version of your choice after you get friendly with this recipe! Pay attention to how all the flavours will work out with the filling when you are choosing which flour to use. You can merge these crusts in yummy quiches and other flavorful pies, these play out nicely apart from sweet fillings!

• Splenda or stevia extract in the raw – ¼ cup

Almost each one of us has fallen in love with the ultimate taste of lard at some point! As lard is sometimes equated with unhealthy alternative, though it’s a sad mishap, as far as what I have experienced, lard creates an irreplaceable taste and flavour in the recipes that is solely unique feel! Lard is also a good supply of all eluded nutrients, so I thought I should just experiment by indulging it in our yummy almond flour pie crust, which turned out as a lovely recipe! 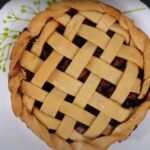 Keep the oven to preheat for 350 degrees F

Amount per serving  Serving size in recipe notes above.