0
Flash Sale! to get a free eCookbook with our top 25 recipes.
Learn More
Table of contents

Smoked Chuck roast is something no one can resist on a Sunday lunch. But do you know what makes the smoked chuck roast taste so heavenly? The chuck roasts are the finely marbled pieces of the beef that have tight connective tissue in it. So, to let the fat slowly render and soften the connective tissue, you have to smoke it low and slow.

So making the smoked chuck roast takes a lot of time and patience of yours! But every effort is worth the taste of it. So in today’s blog, we are going to show you some of the best-smoked chuck roast recipes for an impressive lunch or dinner.

This recipe is perfect for a Sunday pot roast with the extra touch of smoked flavor you will genuinely love. This smoked chuck roast just melts in your mouth and is full of the beefy flavor.

If you want to avoid doing brisket just because of the extra work and the leftovers, you should turn towards chuck roast, which has a more affordable price and weight. It has enough flavor just like the brisket and becomes tender along with sliceable when roasted. This smoked chuck roast is undeniably tasty, and you should try it at home.

Beef chuck has the most neediest flavour of the shoulder. It tastes heavenly when smoked. For a better taste, make use of a more marbled chuck. For a texas style smoked chuck Roast make use of salt and coarsely ground black pepper.

If you are searching for a traditional BBQ menu for the upcoming weekend, you can try this cooked Beef Chuck Roast to create a delicious sandwich. Also, you will have to plan it before 6 hours so that the chuck roast is cooked thoroughly, as it takes time similar to the brisket.

Have you ever tried smoked Pot Roast for any of your special menu? If not, then you need to do that now!! Because the crust on the perfectly cooked meat is heart-melting and believe us, it is the most tender pot roast you will ever have. The smoked chuck roast slices are so juicy and tender that you don’t even need a sauce to chuck it down.

One of my personal favourites which involves chuck roast is this dish. The garlic sage flavour is earthy and when combined with the smoked chuck roast it creates a deadly combo! It doesn’t need constant attention but it still takes 2-3 hours to prepare.

This tender and juicy smoked beef chuck roast is topped with maple bourbon BBQ sauce. This sauce is smoky, spicy as well as sweet. So bourbon is a fun addition to the overall taste of the sauce and the dish is a hit.

Braise the roast in a covered pan filled with the smoke of onions and wood chips which gives it a smoky taste of onion and wood.

We hope you have liked all of our above mentioned smoked chuck roast recipes. Do try them at home and let us know in the comment section below of what you think of them. 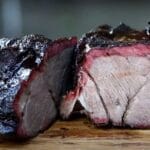 Tender and Juicy Smoked Chuck Roast
If you want to make your own juicy and tender Smoked Chuck Roast for the upcoming Sunday, this recipe will be beneficial. This is a great dish to make at a holiday party as it is cheaper than a tenderloin or prime beef rib and also is easier to find. Also, the added advantage which comes with it is that it goes along well with brisket.
Ingredients
Beef Rub:
Servings: servings
Units:
Instructions
Recipe Notes

Cut the slices from the smoked chuck roast of the parts you want so that it does not get dry.