Suman recipe that will make Philippine course much more exotic!

“A pretty small rice log with soft, tender rice engulfed in vibrant leaves, palm leaves or coconut fronds, which is nicely boiled or steamed” can be the most suitable description for the exotic Philipines delicacy that we are going to share, which is non-other than the lovely Suman recipe! Well, I just wanted to simplify your doubts, so I am going to lighten your doubts by calling it as “rice cake,” as many folks over the globe know by the term “rice cake.”

You would be awestruck by knowing that there are several versions of this exotic Philippine delicacy that you can make at home; many times, people relate various regions with its multiple versions! Suman is cooked with water or coconut milk; suman is soaked for long duration in water when you are using uncooked rice. And this fantastic delicacy is wrapped and steamed when you use cooked rice.

If you have ever been to Philipines, you might have heard the beautiful tales of gourmet Suman recipe. Also, if you have been searching for an easy Suman Recipe, then this piece of information would likely to be the most beneficial for you! Even though you aren’t from Philippines, you can make your homemade suman recipe taste just like an original suman! So, I have brought the easiest suman recipe for you guys with step by step instructions as well as some fascinating tips that will make your suman recipe burst with authentic Philippine flavor. The recipe that I am going to share with you guys will make your suman recipe taste exactly like an original Philippines recipe. So, get ready to taste the most enchanting exotic delicacy of 2021 because I know you all will get through it and would indeed have the pleasure of this toothsome recipe.

Many times this recipe is also prepared with Cassava, and couples up with occasional desserts as a snack or a side dish. The recipe that I am sharing here could also be eaten as a simple dessert when you want some sweets for light occasions—the rice used in this recipe, precisely the very sticky rice. I started to love this light dessert just when I had this gourmet dessert for the first time!

Apart from the rice Suman recipe, Cassava suman is another classic type of suman which is very easy-peasy and prepared from a unique kind of hearty tuber. The very lovely, sugary blend of cassava is also rolled up in the vibrant banana leaves! Here is am going to share the Suman recipe made up of rice with you all, but before that, here is a little overview of ‘what is suman recipe’ for those who are entirely unaware of this gourmet Philippine delicacy.

What is Suman recipe?

If you ever search a little about Philippines, you’ll know that Suman is one of the most favorite bites of Philippine cuisine. However, its pronunciation is quite different than it seems, ‘sooman’! This classic Philippines dish could also be eaten as a dessert prepared with usual ingredients such as sugar, salt, and sticky rice. The word Suman initially emerged from the Luzon, but it is also known as Budbud in the Visayan region. In many parts of the Philippines, this classic dish is eaten as a staple breakfast dish in the morning. This dish is also majorly eaten as an ideal dish for the Christmas season. Suman is one of the most favorite snacks in the Philipines, as its toothsome feel and taste is unmatchable with the flavorsome filling. Even a single bite of tasty Suman can make your heart feel extremely blissful!

Suman has come from the group of Filipino desserts known as kakanin; all of these desserts are primarily prepared from ingredients like rice flour, sticky rice, or starchy root vegetables and blended with coconut milk.

Often, kakanin desserts are steamed, as you can see that the concept of oven never existed in the authentic Filipino cuisines. Some other toothsome snacks and desserts belong to the kakanin family, such as bibinka; this one is prepared with salty eggs, rice flour, and cheese, also Sapin Sapin, which is consists of several colorful layers that are flavored by ube, jackfruit, and coconut.

There are various creative ways of making suman in different regions of the Philippines. But the most simple and easy recipe to prepare the suman is with sweet sticky rice mixed blended with salt and coconut milk. The rice blend scooped onto a beautiful banana leaf and rolled up tightly! The suman recipe is steamed to the point rice becomes completely fluffy and fat. Its taste might mimic the taste of steamed rice dumplings.

The additional fantastic fact that lies about Philippine cuisines is you can create a magical taste with even simple ingredients. However, this recipe requires some guesswork and labor-intensive, specifically some arrangements of banana leaves are quite trickier for beginnings. Banana leaves could be easily found anywhere from stores to the supermarket.

Well, the suman recipe might seem very complicated and trickier if you gaze at it the first time; just take a look at its simple ingredients, and you’ll realize how easy-peasy it is!

This classic style of covering the suman in banana leaf is a very tricky art that would take a long time, but eventually, you’ll get through it! You have to use a little cooking oil and brush the banana leaf so that your suman is prevented from sticking to the banana leaf. You should always use high-quality glutinous rice for this recipe, as it will affect the complete taste of the recipe. Many times I have tried some cheap versions, but I was never satisfied with them, and you could quickly detect the difference when you consume it.

Glutinous rice is available in many varieties and types. Also, you need to check it is pearl rice, waxy rice, biroin chal, mochi rice, botan rice, malagki, sweet rice, or sticky rice; these are the prime variants that you should look for.

Glutinous Rice is also known as Malagkit. It is a kind of rice variant which is popular across the whole Asia and known for its classic culinary use. This kind of rice is very commonly used in various desserts and snacks. Many rice porridge recipes such as Lugaw, Goto, and Arroz Caldo are prepared with this rice type. Thus this classic rice is very famous in this country. We also have another creative way of cooking this rice, i.e., wrapping the rice within beautiful banana leaves. Suman Malagkit recipe is a classic recipe that is suitable for glutinous rice.

So, starting with the excellent quality of local Glutinous Rice is the essential thing for suman recipe; As the Philippines is where many rice types are cultivated, this one is bestest of all to cook suman.

Additionally, you should keep in mind that you have to buy the best quality of white sugar from the supermarket if you want to have the best taste in your suman recipe. And when you are picking banana leaves, make sure you pick up the freshest ones. Always make sure you follow up the cooking time and proportions to prepare the best-flavored suman. 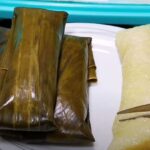