This chicken paella will not make your meal pale.

Paella means frying pan in Valencia’s regional language. In the traditional paella recipe, olive oil is used as a base along with saffron, rosemary branches as the seasoning. For the seasonal ingredients artichokes hearts and stems are used.

There are two main types of Paella which include-

Paella de Marisco, which has Seafood in place of meat and usually green vegetables, as well as green, are not added into it.

Paella Mixta has Seafood, meat, vegetables and also beans sometimes. Chicken Paella is a part of the Paella Mixta.

So now that we know about this famous Spanish dish let us learn how to make this chicken paella.

Make this easy paella recipe within just one hour and serve it to your guests piping hot. This recipe is suitable when you are on a time crunch and still want to make something special. For this chicken paella recipe use a good paella for having the crispy rice crust along with the valencia rice.

Recipe Notes- While making this chicken paella do not make use of the risotto rice like arborio because the rice should not be creamy in paella. Make use of the bomba or the valencia rice which is a short-grain rice.

If you are a fan of authentic and traditional Spanish food, then this dish will please your taste buds. This traditional chicken paella recipe is too good to be ignored and is worth trying.

Want to have a party of the flavours in a skillet? Then you need to try this paella recipe in an iron skillet for that crispy rice bottom and the vegetables. This chorizo and chicken paella proves to be a different meal than the regular ones we have and is a break from the typical daily meals.

It’s an easy yet tasty dish for those who want to avoid Seafood in their Paella. This recipe just turns out nice, and you can surely experiment with its base. The distinct flavours of the roasted bell pepper do add that twist to our usual Paella, and the luscious, juicy pieces of chicken surely do its work in this red pepper and chicken paella.

Get set ready for a flavorful dinner full of mussels, clams, chicken sausage and shrimps. This classic Spanish Seafood and chicken paella are just perfect for a romantic dinner, or even a family get together as the portion is quite enough.

This recipe is inspired by the original paella recipe from the province of Valencia where the ingredients are taken from the fields and not from the sea. This rustic dish has local beans, rabbit and chicken involved, which forms the heart of this dish. This rabbit and chicken paella have an intense flavour all thanks to the meat and the bones.

Cook your Spanish meal hassle-free in this all-in-one recipe where you can cook the whole dish in an oven. Just set your ingredients and one single pot, and you are ready to have some chicken paella.

Make this Spanish dish in a slow cooker within no time. What you need to do is just brown the rice and add everything on the slow cooker. And after a few hours, you will have a tasty dish of Spanish chicken paella in front of you.

Making paella will not be intimidating now onwards and will just take 15 minutes of preparation for making this flavorful dish. This Seafood and chicken paella get extra flavour when you add the chicken thighs to it along with the chorizo if you want some gentle smokiness to it then add the andouille to it.

We hope all the recipes above were helpful for you and you will definitely try these chicken paella recipes at home. Our sole intention of providing you with these recipes is to provide you with some of the best and exclusive dishes which you can try at home. We would be happy to see you making these dishes at home and happily serving it to your families. So do share your pictures of these recipes with us and do comment in the section below with your reviews.

Till then happy cooking to all of you!!

Print Recipe
Quick Chicken Paella
This simple Quick Chicken Paella recipe will be prepared only in one hour, and when you serve it your guests while it's enchanting and hot, you will win their heart! When you are on a time crunch and craving to make out some wonderful exotic, this recipe is the most suitable! You should always make use of great paella for getting the most crispy and crunchy dish, along with the alluring Valencia rice. 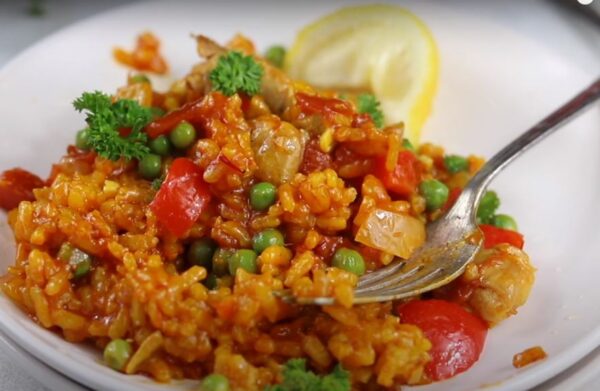