Yummy and Woww are the correct words for describing these spinach brownies undoubtedly.

Spinach brownies!!!! Why are you all so shocked? Does that sound so weird to you? Even if brownies are baked chocolate treats, they can still have any filling. I don’t mind having spinach brownies only if they taste great. If we can have pineapple and chocolate topping on pizza, then why can’t we have spinach in brownies? Sorry to those who love the pineapple toppings!

We want to convey that we should surely give some food items a chance and not cringe away just hearing it’s names. Because even if they sound weird, they may taste good.

Now let me give you a small warning here. If you are assuming these spinach brownies will taste sweet, then you are wrong. Because they are not. This is one of those ways you can shovel spinach in your kid’s diet by giving them a slight hint. You can either use fresh spinach or frozen spinach in this recipe.

7.One cup of milk

Now, these are sweet, and you surely can satiate your sweet tooth with these rich, fudgy spinach brownies. Not only are these super soft, moist, and delicious, they also are nutritious, all thanks to the spinach.

Recipe Notes- These nutritious brownies consume some more time but the end result is very satisfying. You can serve them as a dessert, or as an evening snack to your children too. Or wrap it in a wax paper and pack it in your kid’s lunch too.

ALSO, READ Canned beet recipes are the ultimate elegance in your vegan platter!

These healthy appetizers can be served at friendly football matches or even parties. These spinach brownies can also be served for breakfast as they are wholesome and nutritious. And believe me, no one will complain about having these.

3.One pound spinach, either fresh or frozen

A deliberate attempt of adding greens to your dessert and fooling your children into eating it is itself a guilty pleasure. The significant part is that not many will be able to identify the spinach’s taste in it. The spinach brownies will taste more heavenly when you add the peanut butter frosting to it. If you don’t trust our words, you need to try these chocolate spinach brownies for your review.

13.One and a half cup confectioners powdered sugar

2. Take some spinach leaves and blend them in a food processor along with one or two tablespoons of water until it is finely pulsed. Blend the spinach till you get one cup of it.

3. Take a bowl and add brown sugar, melted butter, along with sugar. Then add the melted chocolate chips, vanilla, and spinach puree.

4. Take another bowl and add the flour, baking powder, along with the cocoa powder.

5. Now slowly add the dry flour mixture to the chocolate spinach mixture and fold till it is mixed smoothly.

6. Add the mixture into the baking pan and bake it for 30-35 minutes till it is completely cooked.

7. Now for making the frosting, beat butter and peanut butter together.

8. Start adding the powdered sugar slowly into it and mix. When it starts to thicken, add some milk to it and mix it till it becomes fluffy.

9. Add the frosting over the brownies after they have cooled and use a spatula for levelling the frosting.

10. Refrigerate it for one hour till the frosting gets set.

11.Cut square pieces of the spinach brownies and enjoy.

These scrumptious brownies taste so good that you would feel proud of making them. It has got all the nutrition it needs and also the rich chocolatey flavor. But one thing you need to remember is that you need them to cool down a little bit so that the taste of the spinach disappears. Overall these spinach brownies are fantastic and worth taking the risk of adding the spinach into it.

These brownies are not only vegan but are also very rich and blissful. Swiping the ingredients with a vegan substitute surely does not make any difference, but the surprising fact is the taste they acquire even with the spinach, which is excellent. So what’s to wait for? Pin this spinach brownies recipe, and make sure to try it for your vegan friends.

These brownies are not the typical sweet ones. With the addition of cheddar cheese, sausages, and spinach, these spinach brownies should not be missed for the World. You can make two to three batches at a time and save them in an air-tight container. Just microwave it whenever you need it, and you are ready to go.

5.One cup of milk

Indulge in the richness of the brownies but with a nutritional punch with these avocado spinach brownies. Avocado and spinach disappear into these brownies just like they don’t exist, but their nutrition doesn’t.

5.Half cup of spinach purée

Making these brownies as a snack is not that hard as it seems. You can make them quickly and store them for a long time in the freezer. Because this recipe makes a large quantity, you don’t need to worry about the sneaky dessert treats your kid’s demand.

Who will tell your children that their favorite brownies have a veggie inside? Sneakily adding spinach to these brownies won’t make a change. And the good news is you can use the box mix of brownie for making these.

1.One box of Brownie mix

2.Half cup of oil

Blueberries and spinach not only taste great in a smoothie but also in brownies. Are you shocked to hear that? Well, we will prove it to you. Just wait and watch.

Spinach is beneficial for the health of the skin, bone, and hair. They are loaded with iron, vitamins, minerals, and protein. The health benefits we receive from spinach are the improvement in the blood glucose control of diabetic patients, improvement in bone health, supplying minerals and vitamins along with lowering the risk of cancer.

One cup of raw spinach has:

We hope the above recipes of the spinach brownies will be helpful for you and that you would definitely try it at home. Please do let us know if the recipes proved to be helpful or not. And do comment in the section below to let us know your views.

ALSO, READ Plant based recipes, here are the best recipes for you! 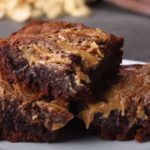 Fudgy Chocolate Spinach Brownies
If you have a thing for an extra sweet rush, these rich, fudgy spinach brownies are the first thing you would like to bring on your dinner table after taking a gourmet bite! Your heart would be wholly delighted with the sweet blissful aroma. Pour lots of love on spinach as these are quite nutritious while being super delicious at the same time.
Ingredients
Servings: brownies
Units:
Instructions
Recipe Notes

This spectacular dish can feel quite a time consuming to newbies, but be assured that you will end up with something much tastier and mouth-watering than the usual treat! You can bring on these lovely brownies as a dessert, or the kiddos will love it as an evening snack. Just wrap it up and keep in the lunch box, your children will be amazed!