If you want to know the delicious taste of the peameal bacon recipe, go and ask the Canadians! Peameal bacon recipe is known as an ideal brunch food! However, this delightful bacon’s story is far more impressive than its actual taste! Those who are utterly oblivious to its deliciousness should give it a try this summer. Peameal bacon recipe is prepared with the wet-cured pork loin that comes from the back part of the hog. The extra fat from the part is specifically trimmed and drenched in gourmet cornmeal; thus, a lovely layer of yellow crust is formed upon it, making it much more appealing and tasty. Initially, the Peameal bacon was drenched in yellow peas, so the term Peameal came to light. This one is relatively lean as compared to usual bacon.

What is the Peameal bacon recipe?

It is prepared with the pork loin part which is drenched in cornmeal after being soaked in the brine for some days; after that, it is wrapped and chilled for some time. Then, the thin slices are chopped out of that and fried as per individual needs, and these slices are served into the slices. These slices taste fantastic and utterly delicious.

Is Peameal Bacon and Canadian bacon the same?

Can you buy Peameal bacon in the United States?

The raw flavor of Peameal bacon is quite different from traditional American-style bacon in almost every way. The cured pork dish is very much juicy, soft, salty, and somewhat spicy, so it makes a great addition to any basic breakfast, making brunch very wholesome. The nicely prepared Peameal bacon will have a very soft texture, regal vibe, and a delicious crispy coating of cornmeal that surrounds the edges, enhancing the classic flavor and texture of the dish. The cured pork dish does not have too much crunch or crisps on it. However, when it is sold, the bacon cut is un-smoked, which means that it is still loaded with the soulful flavor of fresh ham even though it is packaged for the purpose of sale. The basic Peameal bacon is relatively low in fat, thus a healthy option if we look at the other kinds of bacon. If you have been searching for some healthy substitutes for fatty bacon dishes, this unique bacon is a perfect fit for you. This one is ideal for consummating the salty cravings with its utterly delicious flavor.

Can you eat Peameal Bacon raw?

How is Peameal bacon served?

This fantastic cut of meat could be an ideal option to substitute the beef, and it will give the perfect kick of taste to any recipe. When the meat is curbed or sliced, it can be an excellent addition to soups prepared with potatoes or other soup varieties like vegetable soups, chicken noodle soups, chowders, and vegetable stews.

Peameal bacon is also a great addition to different kind of burgers and sandwiches. Cooking a large cut of this cut will delight your heart with the couple of lip-smacking servings and dishes. Cooking the Peameal bacon with peas is an old thing, as it is not prepared with peas nowadays. Peameal bacon is many times prepared with corn-flour for exterior crispiness. If you are a meatloaf fanatic, you should give this a try. Of course! The classic taste and flavor of the unique cut is a true bliss to have at your simple monotonous breakfast!

Can you cook Peameal bacon in the microwave?

Yes, you can cook the Peameal bacon in the microwave. Get some slices and keep them in a hot pan along with the tablespoon of hot oil or butter or keep it in a microwave for 20-30 seconds for a single slice. If there are many people to feed, you can warm up Peameal bacon in a large quantity in the oven, and your recipes would be completely delicious.

Can you cook Peameal bacon from frozen?

How long is cooked Peameal bacon good for in the fridge?

You can freeze the Peameal bacon. Store it in the refrigerator at 1-4 degrees Celsius. When the packaging is already opened, it is strongly advised to consume the bacon within three days.

How long does Peameal bacon last?

You don’t need to worry as you can even consume your Peameal bacon even if it exceeds one day after a finish date. Keep the meat in the meat keeper section of your refrigerator.

What is the yellow stuff on Peameal bacon?

Many people who are oblivious to the Peameal bacon recipe ask this same query! Peameal bacon is a wet-cured pork loin that comes from the back of the hog. This hog is nicely trimmed of fat and drenched in a cornmeal. Thus the tasty, crunchy layer of yellow crust is created upon it.

Why is there cornmeal on Peameal bacon?

The low amount of fat content in the Peameal bacon keeps it luscious and soft and the coating of cornmeal is there to create the crispy edge. The perfectly cooked Peameal bacon will have a little hint of salty-sweet flavor, and its taste will mimic the taste of fresh ham.

Is Peameal bacon bad for you?

Print Recipe
Peameal Bacon Recipe
I incredibly love this Peameal bacon roast! If Peameal bacon is always on the top of your priority list among all other meat options whenever you visit the restaurant, then you’ll love this recipe, as it is going to give you that ultimate restaurant-like feel. 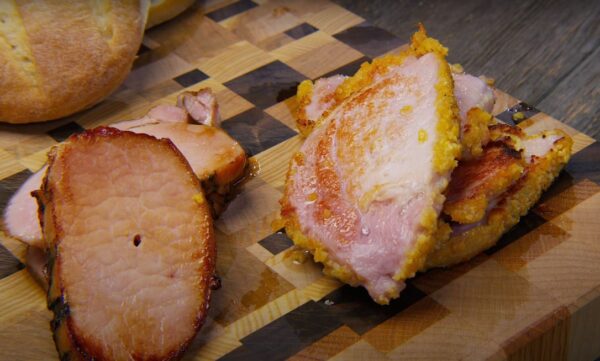