King oyster mushroom can be a significant savior of health! Why? Find out here!

King oyster mushroom is the biggest mushroom variant that belongs to the oyster mushroom genus. It is also known by terms such as king trumpet or eryngii! The most wondrous thing about oyster mushrooms is their soft-to-eat stalks with fantastic woody flavor! Also, they are popularly cherished for their unique umami flavor along with a classic meat-like texture. These mushroom variants are most commonly cooked in Asian food culture. This mushroom is cultivated mainly in regions like Korea, China and Japan.

The appearance of king oyster mushroom is quite striking. Also, it has a long shelf life as compared to other commonly used mushrooms. It has a fantastic texture that resembles with meat life flavour that makes it one of the go-to food options for vegans who would like to have some meaty flavored foods in their diet! That’s why this amazing mushroom is commonly rendered as ‘vegan scallop’. Additionally, this mushroom never loses its shape even after complete cooking.  However, purchasing oyster mushroom could get you into little guesswork and you have to be careful while selecting as these types of mushrooms could cost you a fortune. Whenever you buy these mushrooms, always prefer such types that have a firm texture with clear, spotless stems.

These mushrooms are cleaned from dirt and soil before they reach to supermarket. Some mushrooms are already finely trimmed. But, even if a little hint of dirt comes to your eye, you could easily wash it away. You must select the mushrooms with unbroken caps, as the caps are pretty much delicate and washing rigorously could spoil the shape of mushroom!

You should pick the mushrooms with small size as these are highly loaded with flavor, and they also make the best option for raw and sliced mushroom recipes. However, the classic umami flavor of mushroom will bloom with high peek after thoroughly cooking the mushroom. So, you should not freak out regarding the mushroom’s size; any size will turn out as tasty, woody flavorful recipe.

Well, you all might have imagined the whole goodness of oyster mushroom after reading the above mentioned mind-blowing insights regarding mushroom dishes! Well, you would be more delighted after knowing the complete health and medicinal benefits of oyster mushroom, let’s have a look!

There were some experiments performed on rats that have highlighted the deep insights on the potential of king oyster mushroom in fighting high cholesterol. A study demonstrated on six rats shown that, rats that were supplemented with the oyster mushroom extract had decreased cholesterol levels after six weeks. The study also showed the rapid drop in their overall lipid profile, triglycerides, complete cholesterol and lastly, bodyweight after the consistent supplementation of mushrooms for six weeks. So, this shows the high potential of king oyster mushrooms in combating high cholesterol for humans as well.

Some other excellent benefits of king oyster mushrooms:

There are also several animal studies which have pointed towards numerous other health benefits of oyster mushrooms such as high antioxidant levels that could keep the body cells into a good shape. Oyster mushrooms also have an enormous potential to enhance the state of the immune system that can easily defend against any type of season borne diseases.

Besides this, there is an array of benefits that oyster mushroom can deliver to your health! It’s always a matter of curiosity to add something very exotic like an oyster mushroom in your regular diet and observe its medicinal benefits! Apart from this, the superb, yummy taste of oyster mushrooms feels like a true bliss!

Well, the preparation of oyster mushroom isn’t very much different from preparing any other variant of mushroom! There is no hard and fast guesswork to prep oyster mushroom! These mushrooms are easy to prepare and rapidly spike up the flavor of any dishes. However, the only thing you should be cautious about is buying a good quality of mushrooms! You should always pick the ones that aren’t slimy or wrinkly, as such kind of mushrooms promises good amount edible quality and flavor.

When you begin to prepare oyster mushroom recipe, chop the bottom from the stems first! Apart from this, there are many toothsome dishes that you can prepare from oyster mushroom stems. It is also recommended to wash the oyster mushrooms thoroughly before cooking. So, the mushrooms get rid of all the surface bacteria, dirt and soil at once, and your cooking won’t be affected. Make sure you don’t scrub them vigorously as they only require light rinse and gentle scrub. All the mushroom flavors will bloom at its peak once your mushroom is thoroughly cooked.

Here are some common doubts and queries that arise in minds of many people when they think of giving a shot to oyster mushroom recipe, explore the answers and enlighten your cooking knowledge!

Is it safer to consume whole king oyster mushroom?

Yes, you can use the whole mushroom for consumption provided it is properly cleaned and sliced beforehand the prep. You could sauté, stir-fry, braise and fry the cleaned mushrooms. However, they should be finely cut into chunks. Many people prefer to avoid stems in the recipe and go for fine slices. Additionally, you can also use raw mushroom chunks for salad, but be ready to cope up with some metallic flavor traces.

No, they differ a lot. Regular mushrooms are considered ideal for quick cooking as they have small stems and fragile caps. Whereas, king oyster mushrooms tend to have much larger stems and much shredded texture.

Is oyster mushroom safe to eat?

Yes, it is. Oyster mushrooms will not be harmful if consumed within limits. Also, you can consume oyster mushrooms in raw form by adding them to various salads. They also have a little hint of metallic flavor within them. When your mushrooms are adequately cooked, they will burst with umami flavor, and the texture will be very soft, and sponge-like!

What is the harmful effect of mushroom?

Though oyster mushrooms have not been linked with severe toxicity, gastrointestinal illnesses are some of its little known side effects. It has also been observed that poisonous mushrooms might cause gastrointestinal diseases like vomiting, diarrhoea, nausea and stomach cramps. In very rare cases, death and liver failure are fatal consequences. So, it is advised to consult a physician before eating oyster mushroom if you have had some form of mushroom toxicity in the past.

Print Recipe
Pan-Fried King Oyster
Pan-fried king oyster mushroom is a very delicious treat to nail the cold breezy winters! This delightful dish is must to experience the umami and meaty flavor of mushrooms! 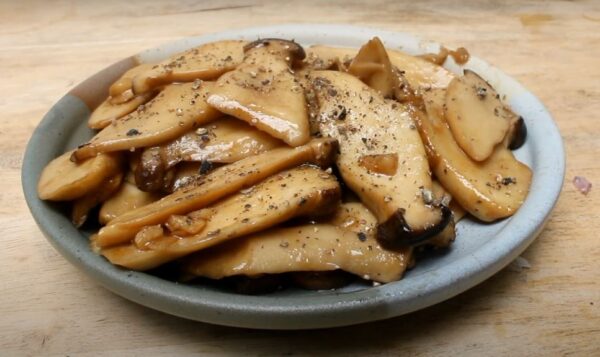 Votes: 0
Rating: 0
You:
Rate this recipe!
Ingredients
Recipe Notes
There is no Nutrition Label for this recipe yet.