Lemon Chess Pie by Duff Goldman – A unique recipe that you should try this 2021!

I have received many requests from you guys asking for an easy and straightforward Lemon pie recipe, and as you all know, delighting my readers with something they crave is one of my greatest quenches as a chef! Lemon chess pie is, of course, one of the most cherished pie recipes ever, and you all might have been craving to discover its most helpful recipe that will guide you towards this whole decadent pie!

Lemon Chess Pie is a forever love for anyone who has a thing for the lemony, fresh vibe, and trusts me; the recipe that I will share with you is absolute magic, as it’s one of the most sought after recipes of famous chef Duff Goldman! Yes, you read it right! I hope that Duff Goldman’s classic lemon chess pie recipe will brighten up your day! And at the end, you’ll thank me after tasting a bite of this world-class pie, the most beautiful amalgamation of sugar, lemon, and butter.

The most amazing thing about this pie is that even though it is shared by one of the famous chefs, it is relatively easy-peasy! First of all, you simply bake the crust, and then you drizzle up some tasty filling into the crust and simply keep it in the oven! Its toothsome filling will enchant your mood with a fragrant lemony vibe! And you should line up such creamy desserts for your special occasions. If you need a reminder, check out my honey pie!

Why Is It Called Chess Pie?

Many people wonder that why this typical dish is called chess pie. Some funny tales suggest that the name chess pie merged from cheese pie, and another funny story indicates that this dish was one of the favorite dishes of those who play chess (lots of laughs)! Whatever might be the reason for this name, we can undoubtedly say that this ultimate delicacy has originated from South America.

This amazing decadent pie has a hint of lemony vibe in its flavor. Amazingly, it has a robust lemon flavor in it, and those who adore fruity flavors in desserts will surely love its smell. The authentic chess pie recipe is prepared with vinegar, but its lemon variant is even tasty as it consists of energizing lemony scent. If you have always adored lemon and its recipe, you fall in love with lemony pie!

Do You Need To Refrigerate Lemon Chess Pie?

Yes, you can! But I would suggest you serve this pie as soon as it reaches room temperature after complete cooking and avoid refrigerating as you would like to have its fresh and fantastic feel. And if luckily you are left with some remaining pieces, you can store them in the refrigerator. This pie will be completely fresh and tasty for two days!

This classic Lemon chess pie recipe is the most fantastic pie recipe that you’ll ever have, as we all know the superb expertise of world-class chef Duff Goldman! This greatly decadent pie is the best recipe to spark your creativity and create some beautiful culinary with this pie! Till now, I have made several pies, but nothing was as delicious as this lemony pie! From chocolate to vanilla, bring on anything still, you won’t be able to replace this superb pie, so stay tuned and discover this fantastic original Lemon chess pie recipe of Duff Goldman! Before starting with this decadent delicacy, I would like to share some fantastic insights about the original chef of this recipe, Duff Goldman!

Duff Goldman was born on December 17, 1974. This famous pastry chef started walking the path of cooking art since he was just four years old. Apart from this, he is a popular television personality and an author of many cookbooks! It was a mesmerizing moment when he was caught by his mother while indulging in some meat recipe! Amazingly, he knew he was born to emerge as a great chef when his finger pinkie was just on the verge of getting hurt by the knife while carving a pumpkin in his pantry!

Duff took cooking as his primary career path when he was 14; begal shop was his first professional workplace in his cooking career. However, things were about to turn ugly when he was going to get fired for making large sized sandwiches.

Duff has completed his education at the University of Maryland, Baltimore County. He has pursued an education in history and philosophy and has completed his bachelor’s afterward. Duff gravitated towards a cooking career and started studying at Greystone in St. Helena, Calif, Culinary Institute of America. Till now, Duff has worked for numerous popular culinary destinations.

Duff left his job in March 2002 and later started his venture named ‘Charm City Cakes.’ Since then, this superb chef has been creating the most incredible culinary arts and decadent delicacies!

Apart from the love of cooking skills, Duff also a keen interest in metal sculpting, and he is an amazing graffiti artist. Duff, along with his some team members, has opened a new venture, a branch of Charm City Cakes West in Los Angeles.

Duff Goldman is a very popular chef and cookbook author! He is quite famously known for his amazing and creative culinary arts and rich dessert delicacies. His art of baking is greatly unique and cherished by many across the world! Duff still owns his first-ever venture ‘Charm city cakes’. Duff has even started two more new ventures named Baltimore and Los Angeles.

Does Duff Goldman have a child?

Yes, Duff is blessed with a beautiful daughter named Josephine Frances. Duff Goldman is a family man and loves his whole expanded family. Duff likes to share his moments of joy with all his admirers and often shares cute photos of his newborn baby. Duff has a wondrous love for his wife and always keeps praising her and says she is an excellent nurturer as a mother.

How much is Duff Goldman worth?

Print Recipe
LEMON CHESS PIE – Recipe courtesy Duff Goldman
This classic pie is a truly decadent delicacy that is known as Southern and Colonial staple pie. This lemon chess pie is a rich delicacy that consists of gelatinous filling, which is prepared with extra creamy cornmeal! This fragrant lemony pie has a tangy taste and tart flavor, along with a very refreshing lemon aroma! You should serve this pie quickly after it reaches room temperature and an extra cup of coffee enhances the whole vibe of your delight! Trust me; you’ll love this pie made by a baking master, Duff Goldman! 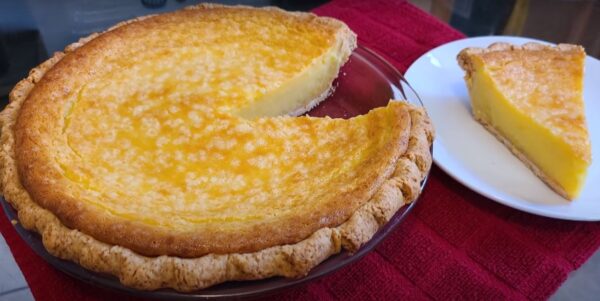