Now it’s just not a chicken sandwich, it’s something more..

Chicken Sandwich is my ultimate favourite. May it be having it as a snack after work or having it as my lunch, I can have it anytime without complaint. This flavorful yet tasty chicken sandwich is easy to make but can be made with the leftover chicken in your fridge.

But having it in the same style gets boring sometimes, doesn’t it? In today’s blog, we are going to show you some of the chicken sandwich recipes you can try at home so that you can make it in different styles to satisfy your taste buds.

The ultimate sandwich for a busy day where you just need to mix veggies, chicken chunks along with mayo. Saute the chicken beforehand so that the chicken sandwich will get ready fast.

Make something delicious in no time by adding some pepper, chicken, veggies, and Mayonnaise. This chicken sandwich is quick and surely is suitable for your breakfast.

Now, this is something you want to try. Because it’s a new trend of the crispy chicken sandwich which has arrived late. Now we may have tried crispy chicken into a burger, but trying it into a sandwich is new.

Add an Italian twist to your usual grilled chicken sandwich. A twist you would love to have in your food.

Fajitas are everyone’s favourite. Its flavours are distinct, which makes the stuffing much more enjoyable. This fajita chicken sandwich will surely be on your list of foods once you try it. You can save up the sandwich in an airtight container if you want to eat it later.

This pulled chicken is made in a slow cooker, and it has bourbon, Italian seasonings and brown sugar in it. The taste comes out a little smoky, which makes it more flavorful. You will have a great dinner with this chicken sandwich when you add homemade coleslaw to it.

Add some extra veggies into your sandwich to make it extra nutritious. The touch of a salad and the chicken really make a heavenly chicken sandwich. If you are diet conscious and have a love for the salad, this sandwich works out well for you.

It is effortless to make at home. It has been inspired by the Whataburger’s Honey BBQ Chicken Strip Sandwich.

You can have this takeout order in the best form, and that is in the form of a chicken sandwich. So what are you waiting for?

When you put together the hot and spicy chicken in a sandwich, then there would surely be a tornado of flavors for your lunch. And this Hot Chicken Fried Steak Sandwich is the perfect example of this. This drool-worthy sandwich is worth making if you want to experience the burst of flavours.

If you have recently turned vegan and are missing your beloved chicken sandwich dearly, then this vegan chicken sandwich will satiate your craving like no other and will surely make you happy with its taste.

A must-try recipe for the dinner, which inevitably turns out delicious in a slow cooker. This mouth-melting chicken sandwich will surely make your dinner memorable once you make it.

A versatile, simple yet delicious dish that is the perfect appetizer if you are hosting a party. This not only works out for a chicken sandwich but also works as an excellent topping for nachos, tacos, and much more.

Recipe Notes- This pulled chicken stuffing also works great as a dip with wafers, nachos, tortilla chips etc. Also you can add it to tacos also as a filling.

We hope you liked all of our chicken sandwich recipes. Do show us some love by trying these recipes at home. Please do comment and share your views in the comment section. 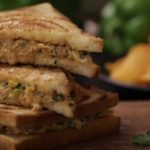 Crockpot Buffalo Chicken Sandwich
Crockpot Buffalo Chicken Sandwich might seem like one of the most complicated dishes out there but trust me it is truly simple yet yummy. This dish will be the perfect welcome treat to please your special folks, a light, tasty and mouth-watering, the best combination for hosting a party. Even though it is traditionally for a chicken sandwich, you can get much creative and use it as a fabulous topping for nachos, tacos, and many other savory foods.
Ingredients
Servings: servings
Units:
Instructions
Recipe Notes

If you want to escalate the yumminess of this ultimate recipe, pair it up with nachos, tortilla, wafers, chips, etc. It also works excellent as a filling in tacos.