0
Flash Sale! to get a free eCookbook with our top 25 recipes.
Learn More
Table of content

Black pepper sauce is something that goes well with rice, meats, potatoes, and much more. Who would have thought that these tiny black pearls could unfold such a drastic taste in a dish and make it taste so decadent? Well, if you haven’t tasted this black pepper sauce before then, it was your bad luck. But it’s never too late, right?

It is a culinary sauce made with cream and peppercorns. Pink, white or black peppercorn can be used for making this sauce. But mostly black pepper or white pepper is used. It is a sort of black pepper sauce too.

This peppercorn sauce is speedy and easy. Also, you don’t need to have cream for this recipe, and you can make use of milk or any other ingredients in your fridge so that you can make it anytime quickly.

This is one of the most preferred steak sauces, which is creamy and has brandy, cognac, cream, beef broth, and lots of crushed peppercorns in it. This black pepper sauce just works exceptionally well with the steak, and you won’t regret making it for sure.

A dish you can make for family get-togethers and even family dinners. And guess what you won’t have to put in some extra efforts too. Just some of this black pepper sauce and roast meat, and you surely feel in heaven.

It is a sort of a pasta sauce that is simple and is not too rich. It is low in fat and is flavorful. It has no butter in it yet can be a good substitute when you don’t need dry pasta.

A great dish if you wish to have Chinese cuisine for dinner. The crispy Chinese chicken with the spicy yet authentic black pepper sauce just makes the dish taste divine.

Recipe notes- While grilling the mushrooms, make sure that you don’t grill the mushrooms a long time before adding it to the sauce, it will become soggy.

This Chinese dish is found in Hong Kong mostly and is quite liked by many. The addition of honey to the beef coats it well and provides a lovely sticky sauce.

When you have delicious grilled tender chicken on your plate, will you be able to resist it? I cannot, for sure! This dish has creamy, bold black pepper sauce over it, which gives it a lot of flavors. But for that tender meat, you need to use the drumsticks and thighs.

Veggies don’t always taste bad, especially when they are roasted and served with the delicious black pepper sauce. This is the right way of including vegetables in your dinner and that too without wrinkling your nose.

This is an easy dish with umami and served with hot steamed rice. It goes perfectly well for weeknight dinners and meatless meals. If you want to invite vegetarian or vegan friends for dinner, then a dish is a good meal for them.

It is a vegan stir fry that has wholesome veggies in it. It is one of the best ways to clear out all the vegetables from your refrigerator. This black pepper sauce has a zing to it, along with the spiciness of the black pepper and crispiness of the zucchini noodles.

A lightly smoked grilled tofu with some added creamy, tangy peppercorn sauce and, of course, the most loved comfort food pommes frites!

We hope you like our black pepper sauce recipes on this blog and you definitely try them at home. Please do let us know your reviews on this blog in the comments below. 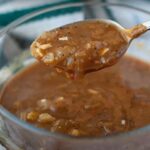 You have to make sure to avoid the over-grilling of mushrooms an extra time before prior you add it to the sauce; it might turn soggy.