Get set ready to surprise your dinner guests with the impressive mojo chicken recipe.

Mojo Chicken is a perfect example of the vibrant and authentic Cuban cuisine. Mojo is any sauce made from olive oil, garlic, pork lard, and the juice of citrus where mostly bitter orange juice gets used traditionally. The purpose of adding is to flavour the cassava tuber or add taste to the roast pork’s marinade.

Now that we know what mojo sauce is, let us know more about the mojo chicken just to enlighten our brain cells.

What is mojo chicken?

A Cuban marinade and sauce are made, which typically consists of garlic, cilantro, salt, oil, and hot peppers. But the specialty of the sauce is that significant importance is given to the citrus taste. So when we marinate the chicken into it, we get an excellent sauce for the mojo chicken.

Now that we have known tidbits about this fabulous mojo chicken let’s dive into its recipes.

Now for this recipe, the chicken needs to be marinated in the mojo marinade, which I believe is too wicked!! And after it is roasted, the juices which flow from it are due with perfection. So now you have this mojo chicken for your dinner tonight. And seriously, you won’t just get up from the dinner table without finishing this tangy, garlicky Cuban chicken.

This is the traditional way of making this recipe. But traditionally Seville orange or bitter orange are found mostly in south-east Asia, Spain and some other parts. If you are unable to find these oranges, you can replace it with fresh limes and navel oranges. This zingy, garlicky chicken mojo chicken has tons of flavor to explore, and you sure will enjoy having this in your menu.

Recipe Notes- You can also serve this dish with cauliflower rice which is somehow extra flavorful than the normal rice.

This recipe is served with white rice traditionally. Also, you can serve it with mashed potatoes or sandwiches having Cuban bread. So this unique mojo chicken recipe should definitely be tried once..

If you don’t have the patience to wait and make the traditional style mojo chicken recipe, this recipe will be your favorite from now onwards. This tropical flavors inspired dish can be made on a grill as well as on a skillet within just 30 minutes.

Marinated in the Cuban citrus-garlic marinade, this is an easy mojo chicken breast recipe that gets the juicy perfection you won’t believe. You can pair this up with white rice or even roasted potatoes.

ALSO, READ Food Fantasy Recipes with all the ingredients just for you!!!

Mojo Chicken in the crockpot

To make this recipe a super hit, what you need to do is just marinate the chicken with garlic, oranges, jalapenos, and lime for that exclusive mojo flavor. You can use any pieces of the chickens and can also grill or broil it. And now the crockpot does all the other hard work from cooking the chicken to absorbing its marinade, and what you get in front is a flavorful plate of mojo chicken.

If you are deep in love with Mexican food and especially tacos, then this recipe can surely satiate your craving. You ask why? The answer is because we are going to make tacos with the filling of mojo chicken, and you can use a slow cooker for it. And the topping on the taco is the rich avocado crema, which surely tastes heavenly.

This Spanish style slow cooker recipe is not only healthy but also very flavorful. The slow-cooked chicken flavoured with lemon, garlic, orange, and spices is full of juices and flavour along with the heavenly sauce. This mojo chicken recipe will undoubtedly earn you some points if you serve this to your guests.

For chicken and rice bowl-

It is a tasty appetizer for your game night or football match. These easy to make homemade chicken wings are marinated in the Cuban mojo spices and seasoning, and these mojo chicken wings baked in the oven for that crispy texture.

If you love outdoor grills and love having those charred pieces from the barbecue, this char-grilled mojo chicken wings recipe is for you.

Make this zingy, spicy sandwich for lunch and impress your family members with it. Filled with the mojo chicken stuffing this recipe proves to be very different from the typical sandwiches we have for lunch.

Now, if you haven’t heard of this recipe before then, no offence. You will know it and taste it now. This scrumptious mojo chicken torta has a little much of effort but a lot more of taste and flavours. It is perfect for a heavy lunch or even better for picnics and camps. So what are you waiting for? Read in the recipe and gear up to try it.

These are all the recipes for today’s blog. Please do try these mojo chicken inspired recipes and let us know your views on it. 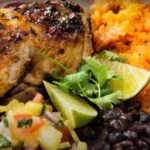 Typical Mojo Chicken
TYPICAL MOJO CHICKEN - This recipe is the most traditional way of making the recipe of mojo chicken. You can find Seville orange or bitter orange in Spain and South Asia, and even if you don’t find it, you can utilize the fresh limes and navel oranges as the substitutes. There is tons of flavour to discover that is hiding behind this savoury aromatic mojo chicken, and once you taste it, you will become addicted to its flavour.
Ingredients
For the Marinade:
For the Chicken:
Servings: servings
Units:
Instructions
Recipe Notes

Cauliflower rice also makes a fantastic side dish to this dish, as it is highly flavorful than the regular rice.

There is no Nutrition Label for this recipe yet.